Meryl woke up yesterday at 5:15am when one of the baby's water broke and immediately called me to let me know to get on a plane ASAP.  I had just arrived back home in CA the night before, and I was able to book a 6:30am flight and got on it right as they were closing the door to take off from LA.  Thank you Lord.

Throughout the morning, Meryl had strong contractions and the doctors pushed up the delivery time once all the key players had arrived at the hospital.  With around 24 people or so in the Operating room, and another 40-50 people in the baby recovery room ready to receive the babies once they were pulled out, it was game time.

Dr. Elliott and team were great and they got all 5 babies out in less than 3 minutes.  The babies are all doing fabulous.  Dr. Elliott told me yesterday that after he performed surgery on Meryl to save the pregnancy at 18 weeks (June 12th), he didn't think the babies would last more than a week.  He said that if you would have told him that she would have made it this far, he would not have believed you.  He said Meryl did the best he has seen from where she started.  Thank you Meryl for being a fighter until the end and giving an olympic-type performance.  Many will never know how much you sacrificed and struggled to give our babies the best chance at a quality life physically and mentally.  I want to say "Thank you" and that I am very, very proud of you.

Here is part of the press release released yesterday.

More than 30 Banner staff and clinicians came together to assist in the delivery of the "Fabulous Five" - a set of quints born to California residents Meryl and John Ferraro under the care of perinatologist and multiple birth specialist John Elliott, MD.

The quintuplets were born at Banner Desert Medical Center on Sept. 26. This is the second set of out-of-state quintuplets that have been delivered by Dr. Elliott in recent weeks.  The delivery went wonderfully because of the excellent teamwork and coordination of the Banner Desert Labor and Delivery and Cardon Children's NICU staff. Making the successful delivery possible were:
Ms. Ferraro, 39, came to Mesa in order to receive the highest level of care for her high-risk pregnancy. Ferraro and her husband, John, chose to temporarily relocate after learning of Dr. Elliott via online research, and later interviewing him.
Ms. Ferraro is in good condition at Banner Desert, and her five babies are receiving care in the neonatal intensive care unit (NICU) at Cardon Children’s Medical Center.
The Ferraro babies – three girls and two boys – were born between 11:01 and 11:04 a.m., on Wednesday, September 26, following a pregnancy of 32 weeks and five days. The national average gestation for quintuplets is 28 to 29 weeks.

Ms. Ferraro and John additionally have a 2-year-old daughter, Gianna. The family plans to return home to Fullerton, Calif. once all the babies have been discharged from the NICU. You can visit their blog, “G.R.A.C.E. Plus One” for updates on the babies progress at www.socalquints.com. 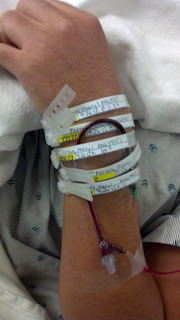