Cooper "Coop" Elliott Ferraro (baby C) was born third.  He was the most active inside the womb and is still the most active of the bunch displaying a lot of energy.  He was situated in the middle left inside Meryl.  As you can see from the picture below, he is the only one still on a Nasal CPAP machine.  He also got a picc line put in today to help with feeding him until he is able to breathe on his own.  Currently, the NICU team thinks he will be the last one to leave the hospital in about 4-5 weeks.  When Gianna saw Cooper with his CPAP and struggling a little bit, she said, "It's ok Cooper...It's ok."  He is a fighter destined for great things like his namesake Dr. John Elliott.  I am hoping to hold Cooper for the first time later tonight.  He got the first dose of breast milk to help with his recovery.  He is the only baby who has not already started feedings.  They are feeding him directly through a tube into his tummy.  But, we expect a full recovery for little Cooper in the next few days. 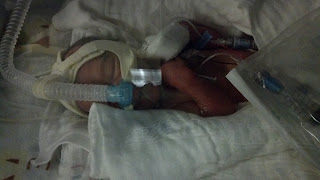